Release Special: The Seance: A Gothic Tale of Horror and Misfortune by Jack Rollins.

I was fortunate to have a chance to read and review an ARC of The Seance and I enjoyed it very much, you can find my review here. The Seance is due out on the 31st of October, it's a perfect Halloween read , so be sure to grab yourself a copy and settle down for a good creepy read. 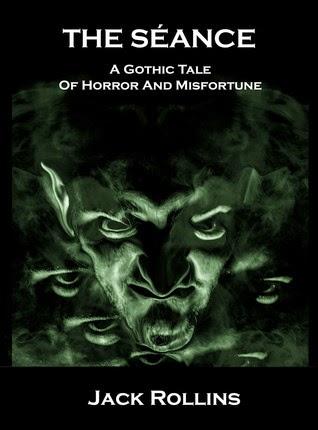 The Victorian age of credulity saw the rise of Spiritualism, and with it a slew of shysters and fraudsters seeking out the vulnerable with promises of establishing contact with otherworldly forces.
Albert Kench returns to London, where he seeks to discover the true nature of his sister's sudden mental illness. What he discovers takes him beyond the illusions of the tricksters, and into the path of a man with true knowledge of the Dark Arts.
All Albert has to do is believe...

I really enjoy the writing style of Jack Rollins, the tales he weaves are both original and atmospherically dark and gothic. The way he builds the Victorian age and atmosphere in his stories pulls me effortlessly into another time and place.

I have always been fascinated by spiritualism and the mediums of the Victorian era. There's just something about it that captures my imagination. Reading Seance was like bringing all those old black and white photographs - of darkened rooms with candles, of people sitting round tables holding hands to contact the dead, of spectral ectoplasm and tables tipping - to life.

If you're not already tempted to go and grab that copy, let me give you a little sneak peek at the first few pages:

When I arrived at the gates of Oakbridge Asylum, I could not have been more surprised. Through the sculpted iron gates, my eyes discovered what looked like a stately manor, rather than a place for society to hide its idiots, lunatics and madmen. Prior to that time, I’d had little need to visit such a place and so the mind had always conjured up images of shackled living skeletons howling and screaming long into the night.
This thought may at first seem like nothing to anyone else, but when one attends the asylum to see one’s sister, well, the mind simply races.
A man in a navy blue uniform, with waistcoat, cap and bow tie opened the gate. He glanced at a small slip of paper in his hand and asked, “Mr Albert Kench, is it?”
“Yes,” I replied.
“Follow me,” he said, opening the gate further, so that I could pass.
“I am John Hayward. Dr Ellis said you were coming today, and I am at your service.”
“’Obliged. One of the guards, are you, Mr Hayward?” I asked.
Hayward frowned at me and shook his head. “Guards? No guards here, Mr Kench. I’m an attendant. I work in the gentlemen’s wing, and I am captain of the male attendant’s cricket team, as well as trumpeter with the asylum band.”
“No guards?” I asked, barely registering the other parts of Hayward’s response. “Why, who keeps the lunatics in?”
Hayward chuckled and spread his arms out to either side, drawing my attention to the cultivated gardens at either side of the road. “Keep them in? Who would want to leave? The only thing we would need guards for is to keep others out, sir. The patients have been through enough, without the outside world burdening them further.”

I was stunned, and for a few moments I was in silence. Here we were in an island of tranquillity in the North West of London. I did not know whether it was the fact that the sun was able to permeate the thick atmosphere this far from the city proper, or the sound of the birds singing in the trees to my left and right, but for a moment I felt as though I would never leave Oakbridge.
“You said ‘gentlemen’ before. That explains the beauty of the grounds,” I said, assuming myself to at last be on the same track as Hayward.
Hayward stopped, his moustache raising at the sides as he smiled. I had amused him, it seemed. “Mr Kench, we refer to all of the men who live here, low-born or high-born, as gentlemen. And all of the ladies are ladies to us. You are here to see Sally, yes?”
“I am.”
“Your sister?” Hayward guessed, still smiling, eyebrows raised in anticipation of my response.
“Yes, Sally is my sister.”
“Perhaps, when your visit with poor Sally is over, you will better understand the ethos of our beloved Oakbridge. Perhaps you will understand that when I play the trumpet for the asylum band, there are two trumpeters next to me who are more capable than me, but who are called insane and idiot by the world outside. There is a man who can drum better than any I have heard, who lives here very safely, but who wanted to bring his own life to an end out there in that cruel city.
“Perhaps you will come to understand how it was that last Sunday the patient cricket team beat the attendants most decisively, and how we will do our damned best, beg your pardon, to beat them this Sunday if the Lord sees fit to withhold the rain.” Hayward continued to walk up the road, and I followed him, quite dumbstruck at how… improper it seemed that high-born and low should be so closely associated in a place that concerned their private health.

The Seance is available now on Amazon and other stores to pre-order and will be released on the 31st October. Don't miss out on a great Victorian horror!

Posted by Scarlet Aingeal at 19:56