Blood Sacrifices is comprised of a short story and three novellas. The short story, The Girl From The Blood Coven, being a short prequel to The Witching House, followed by two independent novellas, Darkness Rising and The Vagrants.

I particularly enjoyed The Girl from the Blood Coven and was pleased to see that The Witching House continued on with this story. I was left curious to learn more about the house and what led up to the events, and The Witching Hour was exactly what I was looking for. These two were my favourites from the collection.

Darkness Rising was a bittersweet story, the main character of Marty is very appealing and easy to care for, this makes his horrific story all the more heartbreaking and poignant. I enjoyed this as much as the above but in a different way. The Girl from the Blood Coven and The Witching House caters more to my personal preference where horror is concerned but Darkness Rising really stood out as it's particularly haunting and poignant. Bad things happened to good people.

The final story, The Vagrants was yet another great story but was the one I have to say I enjoyed least of all. It wasn't that it didn't draw me in, it just felt like it went on a bit in places.

Moreland writes in a way that draws you in instantly. The opening paragraphs of each story get their claws into you and you just have to read on. All of the stories stand out in their own way and there is something for everyone here.

Blood Sacrifices is one that I would highly recommend reading, it's full of tension, atmosphere and moves at pace that will have you on the edge of your seat.

Some evils require sacrifices.
From the author of Dead of Winter and The Devil’s Woods come four tales of blood-tingling horror:

The Girl from the Blood Coven
In this short prequel to The Witching House, when Abigail Blackwood claims her hippy commune family has been massacred, Sheriff Travis Keagan and his deputies investigate. They discover there’s more than weed smoking going on at Blevins House. Much more.

The Witching House
Sarah Donovan is scared of just about everything, but she helps her adventurous boyfriend investigate the old, abandoned Blevins House, scene of a forty-year-old unsolved massacre. Little do they know the house is hungry for fresh prey…

Darkness Rising
When Marty Weaver encounters three killers who like to play sadistic games with their victims, his own scarred past is unearthed. And when his pain is triggered, blood will flow…and hell will rise.

The Vagrants
Beneath the city of Boston, evil is gathering. While living under a bridge with the homeless, journalist Daniel Finley witnessed something that nearly cost him his sanity. Now, with a book published about the experience, he’s caught between the Irish mafia and a deranged cult preparing to shed blood on the street.

This is a collection of books previously published in digital format.

Brian Moreland is a best-selling and award-winning author of novels and short stories in the horror and supernatural suspense genre. In 2007, his novel Shadows in the Mist, a Nazi occult thriller set during World War II, won a gold medal for Best Horror Novel in an international contest. The novel went on to be published in Austria and Germany under the title Schattenkrieger.
Shadows in the Mist, Dead of Winter, and The Devil’s Woods are his currently available novels, as well as his Kindle short-story The Girl from the Blood Coven and the novella it led into called The Witching House.  Now, he has released the full-length The Devil’s Woods. His novella, Vagrants, released in 2014 and another, Darkness Rising, in 2015.
He loves hiking, kayaking, watching sports, dancing, and making guacamole. Brian lives in Dallas, Texas where he is diligently writing his next horror novel.  When not working on his books or books for other writers, Brian edits documentaries and TV commercials around the globe. He produced a World War II documentary in Normandy, France, and worked at two military bases in Iraq with a film crew. 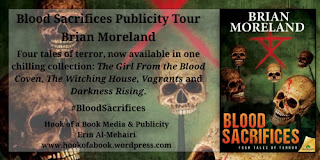 Posted by Scarlet Aingeal at 19:12 No comments:

Review: I Kill in Peace by Hunter Shea

I Kill in Peace by Hunter Shea

I received a free copy of I Kill in Peace from the publisher in return for an honest review.

I can't say that I enjoyed this one but at the same time I can't say that I didn't enjoy it either. Even though it held my attention while reading, now that I'm sitting down to write my review I find myself struggling to put words to what it was that I liked and disliked.

The character of Peter was done well, his struggles with what he was doing and the progression of his character were well written. The plot was unique and the pacing was consistent and I did enjoy the story enough that I wanted to keep reading but the religious aspect and the ending ruined it for me. The whole religion thing is the stuff of fairytales as far as I'm concerned so perhaps I just can't relate or suspend my belief enough to have enjoyed it.

In the end this one just wasn't for me.

Posted by Scarlet Aingeal at 23:18 No comments:

The Devil's Serenade by Catherine Cavendish

I received a free copy of The Devil's Serenade from the publisher in return for an honest review.

For me, a good haunted house story means checking the dark corners of the room and being scared to lower my feet to the floor lest something be hiding under the bed. I didn't find that within The Devil's Serenade.

The story builds rather slowly, creating a dark and slightly eery atmosphere as it progresses. Things are more subtly hinted at for a large part of the book, which I wasn't so keen on but it begets an air of mystery, has you unsure of what's really happening, and keeps you reading.

The plot is unique and different and there are plenty twists to keep the reader on their toes. And even though I enjoyed the story, it didn't instill in me the fear, anticipation and apprehension that makes haunted house stories one of my favourite things to read. I wanted to be scared, to be reaching for the light or jumping at every little sound but I wasn't feeling it.

The pace picks up in the latter part of the book but I found it a little frantic, rushed and at odds with the previous pacing. In the end, despite the subtle hints and happenings, things seemed rushed and it felt like everything was thrown at me all at once.

I think in the end it all boils down to the fact that The Devil's Serenade told me a story about a haunted house rather than drawing me in and allowing me to experience the haunting for myself.

Posted by Scarlet Aingeal at 03:10 No comments: